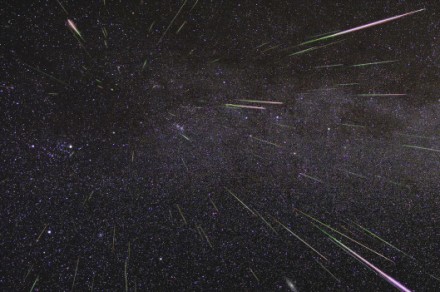 How to watch the Perseids Meteor Shower this weekend

This weekend is the peak of the yearly Perseids meteor shower, and if you’re lucky, you might be able to spot a flurry of shooting stars overhead. Views will be hampered, however, by a full moon which unfortunately coincides with the event and which will make the shower harder to see.

The shower was in full swing yesterday evening between Friday, August 12, and Saturday, August 13, and despite the issue of the moon’s brightness, there were still some stunning photographs captured from around the world. Tonight you’ll have another chance to see the shower, and it will continue throughout this week but will gradually tail off — so the sooner you can catch it, the better.

A shower of Perseid meteors lights up the sky in 2009 in this NASA time-lapse image. NASA/JPL

The reason that the full moon interferes with seeing the Perseids is because of its brightness, which washes out the smaller streaks of brightness caused by the meteors passing through Earth’s atmosphere. So you’ll see fewer meteors, but some of the brighter ones will still be visible.

“Sadly, this year’s Perseids peak will see the worst possible circumstances for spotters,” said NASA astronomer Bill Cooke, who leads the Meteoroid Environment Office at NASA’s Marshall Space Flight Center in Huntsville, Alabama, in a statement. “Most of us in North America would normally see 50 or 60 meteors per hour, but this year, during the normal peak, the full Moon will reduce that to 10-20 per hour at best.”

Your best chance to see the shower is to find a dark area as far from light sources such as street lights as you can. Lie on your back and look up to the sky, giving your eyes time to adjust to the dark — this can take around half an hour, so don’t look at your phone as the brightness from the screen can hamper the process. You don’t need a telescope or binoculars to see the meteors — just keep your eyes on the sky and look out for shooting points of light.