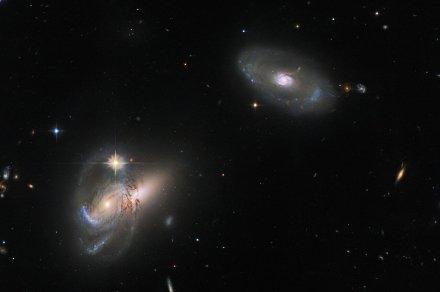 Though we’re still reeling from the first images of distant galaxies taken by the James Webb Space Telescope, we can’t overlook the contributions of our old faithful friend Hubble. Researchers share stunning images taken by the Hubble Space Telescope every week, and this week’s image shows a trio of galactic objects of varying different types.

These objects, located in the constellation of Hercules, were imaged in the optical wavelength by Hubble. There are three main objects here: the prominent galaxy LEDA 58109 in the top right, named for the Lyon-Meudon Extragalactic Database in which it is cataloged, and two more objects in the bottom left. The most distant of these two objects is the galaxy  SDSS J162557.25+435743.5, named after the Sloan Digital Sky Survey, and in front of this is an active galactic nucleus called SDSS J162558.14+435746.4.

This luminescent image features multiple galaxies, perhaps most noticeably LEDA 58109, the lone galaxy in the upper right. LEDA 58109 is flanked by two further galactic objects to its lower left — an active galactic nucleus (AGN) called SDSS J162558.14+435746.4 that partially obscures the galaxy SDSS J162557.25+435743.5, which appears to poke out to the right behind the AGN. ESA/Hubble & NASA, W. Keel

An active galactic nucleus or AGN is a busy region at the heart of a galaxy that is notably bright, but this brightness is not necessarily due to stars. The light given off by these regions can be in the radio, microwave, infrared, and ultraviolet wavelengths as well as visible light, and it is thought to be given off by the enormous supermassive black holes which lie at the center of almost every galaxy. As these regions shine brightly, they can obscure other galaxies like the example seen in this image.