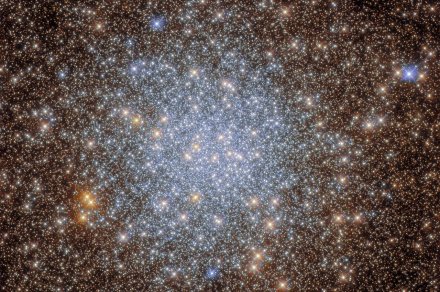 Hubble captures a glittering cluster of thousands of stars

This week’s image from the Hubble Space Telescope shows a stunning field of stars called a globular cluster. Taken with Hubble’s Wide Field Camera 3 and Advanced Camera for Surveys instruments, the view captures the beautiful depths of the globular cluster NGC 6569, located in the constellation of Sagittarius.

“Globular clusters are stable, tightly bound clusters containing tens of thousands to millions of stars, and are associated with all types of galaxies,” Hubble scientists explain. “The intense gravitational attraction of these closely packed clusters of stars means that globular clusters have a regular spherical shape with a densely populated center — as can be seen in the heart of this star-studded image.”

This image from the NASA/ESA Hubble Space Telescope captures the sparkling globular cluster NGC 6569 in the constellation Sagittarius. Hubble explored the heart of this cluster with both its Wide Field Camera 3 and Advanced Camera for Surveys, revealing a glittering hoard of stars in this astronomical treasure trove. ESA/Hubble & NASA, R. Cohen

It is hard to see in the region at the center of the Milky Way, as there is a lot of dust there that gets in the way of observations by blocking off light and changing the color of the light that can be seen. To address this, Hubble scientists combined both data collected by the telescope’s instruments with data from astronomical archives so they could better understand both the age and the structure of these globular clusters.