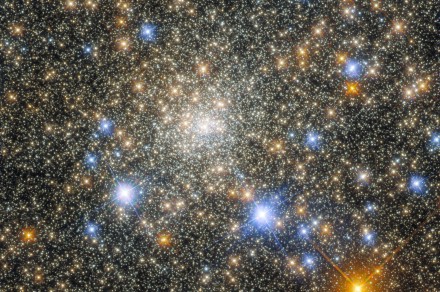 The James Webb Space Telescope might be getting all the news headlines this week, but the grand old dame of the space telescope world, the Hubble Space Telescope, continues to peer out into the cosmos and provide stunning views of space. At over 30 years old, Hubble remains one of the key instruments for examining cosmic objects in the visible light range and captures views of everything from distant galaxies to beautiful nebulae to planets in our solar system.

The image shared this week from the Hubble Space Telescope shows a globular cluster called Terzan 2, with a blanket of sparkling stars visible by the thousand over the blackness of the sky.

The globular cluster Terzan 2 in the constellation Scorpio is featured in this observation from the NASA/ESA Hubble Space Telescope. ESA/Hubble & NASA, R. Cohen

Both images were taken using two of Hubble’s instruments, the Advanced Camera for Surveys and the Wide Field Camera 3, in concert. “Despite having only one primary mirror, Hubble’s design allows multiple instruments to inspect astronomical objects,” the Hubble scientists write. “Light from distant astronomical objects enters Hubble where the telescope’s 8-foot primary mirror collects it. The primary directs that light to the secondary mirror that reflects the light into the depths of the telescope where smaller mirrors can direct the light into…