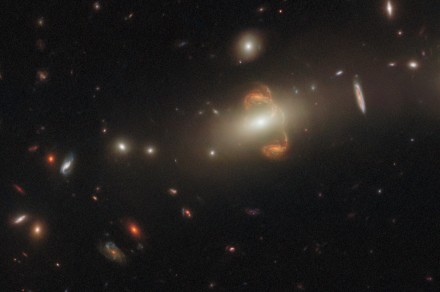 The Hubble Space Telescope is a constant source of beautiful pictures of the wonders of space, and this week’s Hubble image shows a wonderful example of a phenomenon called gravitational lensing, which helps scientists see incredibly distant galaxies. It shows the galaxy SGAS J143845+145407, which appears twice as if in a mirror.

If you’ve heard of gravitational lensing recently, it’s likely because the same phenomenon was also visible in the first deep field image shared from the James Webb Space Telescope. That image showed how extremely distant galaxies were visible due to the bending of spacetime caused by the gravity of galaxy cluster SMACS 0723.

This intriguing observation from the NASA/ESA Hubble Space Telescope shows a gravitationally lensed galaxy with the long-winded identification SGAS J143845+145407. Gravitational lensing has resulted in a mirror image of the galaxy near the center of this image, creating a captivating centerpiece. A third distorted image of the galaxy appears as a bridge between them. ESA/Hubble & NASA, J. Rigby

“Hubble has a special flair for detecting lensed galaxies,” Hubble scientists write. “The…