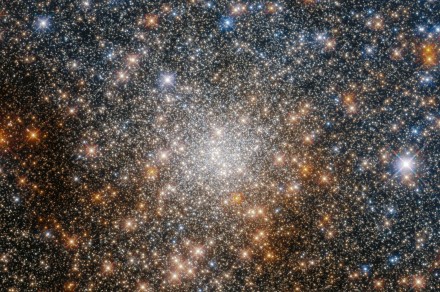 Hubble snaps globular cluster near the heart of our galaxy

Stars shine like diamonds in this week’s image from the Hubble Space Telescope, which shows globular cluster Terzan 9.

Located in the constellation of Sagittarius, Terzan 9 is relatively close to the center of the Milky Way. “Globular clusters are stable, tightly bound groups of tens of thousands to millions of stars,” Hubble scientists explain. “As this image demonstrates, the hearts of globular clusters are densely packed with stars. Terzan 9 is dotted with so many glittering stars that it resembles a sea of sequins, or a vast treasure chest crammed with gold.”

This star-studded image shows the globular cluster Terzan 9 in the constellation Sagittarius, toward the center of the Milky Way. The NASA/ESA Hubble Space Telescope captured this glittering scene using its Wide Field Camera 3 and Advanced Camera for Surveys. ESA/Hubble & NASA, R. Cohen

The center of the Milky Way, called the galactic bulge, is a region rich with stars. Most of the Milky Way, like most spiral galaxies, is a flat wheel shape, but in the center, the bulge sticks out from that plane. The stars which make up the bulge are different from those lying in the plane, as those in the middle tend to be older and redder.

There is also a lot of interstellar dust in the Milky Way’s galactic bulge, which makes it harder to study this region as the dust obscures the view. “This dust makes globular clusters near the galaxy’s center difficult to study, as it absorbs starlight and can even change the apparent colors of stars in these clusters,” the Hubble scientists explain. “Hubble’s sensitivity at both visible and infrared wavelengths allows astronomers to measure how star colors change due to interstellar dust. Knowing a star’s true color and brightness allows astronomers to estimate its age, and thereby estimate the globular cluster’s age.”