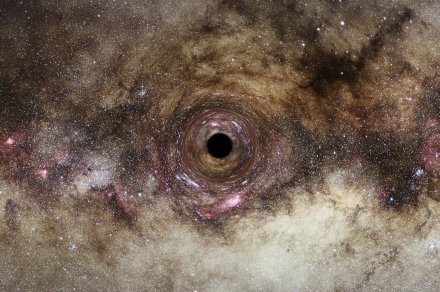 Out in the depths of our galaxy roam lonely monsters: Isolated black holes which drift through space unattached to stars or other black holes. Though astronomers know that up to 100 million of these black holes exist in the Milky Way, they are exceedingly hard to spot. But now, data from the Hubble Space Telescope has been used to identify one of these lonely wanderers for the first time.

Located 5,00 light-years away in a spiral arm of the Milky Way called Carina-Sagittarius, the black hole was spotted by looking at the way it warps the light coming from stars behind it. As black holes don’t emit any light themselves, their presence has to be inferred from seeing their effects such as the way their gravity bends light from other sources.

This is an artist’s impression of a black hole drifting through our Milky Way galaxy. The black hole distorts the space around it, which warps images of background stars lined up almost directly behind it. This gravitational “lensing” effect offers the only telltale evidence for the existence of lone black holes wandering our galaxy, of which there may be a population of 100 million. ESA/Hubble, Digitized Sky Survey, Nick Risinger (skysurvey.org), N. Bartmann

Most black holes are spotted either as part of a binary system, in which a black hole and a star orbit around each other, or in the busy central regions of galaxies. A wandering black hole is only created when an unusually enormous star, at least 20 times the mass of our sun, explodes as a supernova and leaves behind a dense core that forms the black hole. If the supernova explosion isn’t symmetrical in all directions, the force of the blow can send the core shooting off into space, where it can continue to travel alone.

To identify this wandering black hole, researchers looked at data from both ground-based telescopes and Hubble for signs of an effect called gravitational lensing. This is where a body with a lot of mass — in this case, the black hole — has such strong gravity that it warps the light traveling from stars behind it, acting like a magnifying glass and making that light brighter for a…