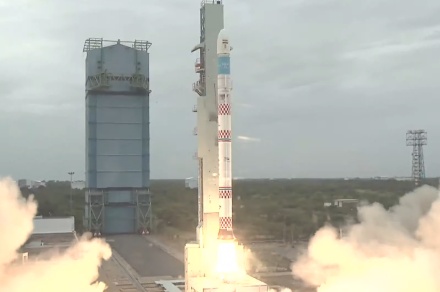 The Indian space agency ISRO has debuted a new satellite-deploying rocket, the Small Satellite Launch Vehicle or SSLV, with a launch from Sriharikota, India on Sunday, August 7 at 09:18 am local time. The rocket launched as planned and deployed two satellites, Earth observation satellite EOS-02 and CubeSat AzaadiSAT full of payloads built by students and schoolchildren. However, these satellites were placed into an incorrect orbit and have since been destroyed.

The SSLV rocket is designed to carry small satellites of up to 500 kilograms (1,102 pounds) into low-Earth orbit, to serve both ISRO and commercial needs. This mission, named SSLV-D1, was the first launch of the rocket which has been in development since 2015.

In a video statement, S. Somanath, the chairman of the ISRO said that the SSLV’s first three stages performed nominally and that the vehicle’s overall performance was very good. When the rocket reached altitude of around 350 kilometers both satellites were separated, Somanath said, “However, we subsequently noticed an anomaly in the placement of the satellites in orbit. The satellites were placed in an elliptical orbit in place of a circular orbit. The 356 km circular orbit was our intended orbit, but it placed the satellites in an elliptical orbit of 356 by 76 kilometers.”

The problem with satellites being placed in an elliptical orbit, in which they are sometimes closer to Earth and sometimes further away, is that drag will degrade the orbits over time, and eventually, the satellites will burn up in the atmosphere. “The satellites have already come down from that orbit, and they are no longer usable,” he said.

He also said the cause of the issue with the SSLV has been identified as a logic problem that failed to identify a sensor failure, but further investigations are ongoing. He emphasized that all other components of the rocket worked as intended, and the ISRO was optimistic that only small corrections would be required to the rocket system before the second…