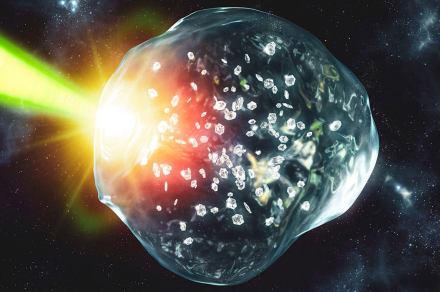 Inside giant ice planets it could be raining diamonds

The universe is stranger than you can imagine, and out in the depths of space, there are wild and weird exoplanets to be found — planets with glowing rivers of lava, or planets under gravitational forces so strong they are shaped like a football. We can add to this list another class of strange planet, ones on which it rains diamonds.

The diamond rain effect is thought to occur deep within ice giants like Uranus and Neptune, and it was re-created in a lab here on Earth in 2017. Now, researchers have found that this effect isn’t just a rare fluke but could be more common than previously thought.

Diamond rain can occur deep within ice giant planets and is more common in the presence of oxygen. Greg Stewart/SLAC National Accelerator Laboratory

The international group of researchers working with the SLAC National Accelerator Laboratory previously created the diamond rain effect by placing hydrogen and carbon under extremely high pressures. But in this new research, they wanted to make the conditions more realistic to what the interior of an ice giant planet would be like by also including other elements that would be present, such as oxygen.

To simulate this mix of chemicals, the researchers used a familiar material — PET plastic, like that used in good packaging, which turns out to be chemically similar to the conditions they wanted to create. “PET has a good balance between carbon, hydrogen, and oxygen to simulate the activity in ice planets,” explained one of the researchers, Dominik Kraus of the University of Rostock.

The researchers used a high-powered laser to create shock waves in the plastic, then observed how X-rays bounced off it. This let them see how small diamonds were forming. The diamonds produced in the experiment were very small, called nanodiamonds, but at around 5,000 miles beneath the surface of an ice giant much larger diamonds could form, where they would fall toward the planet’s icy core. The diamonds could even sink into the core and form a thick diamond layer.

In the new experiments, the team found that when they included oxygen then the nanodiamonds grew at lower…