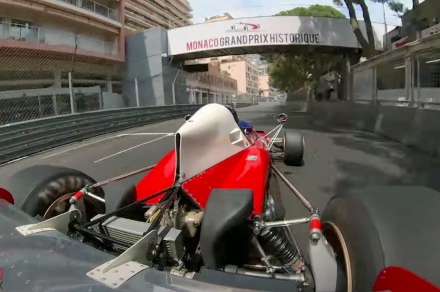 With the cameras firmly fixed to different parts of the vehicle, Leclerc hit the gas and showed off his driving skills as he hurtled around the demanding circuit.

The dramatic footage showcases what you can achieve when you combine breakneck speed with a bunch of carefully placed action cameras.

Note, however, that the video begins in a 312B3 that featuring the number “12,” but switches to another showing the number “4” — presumably because Leclerc crashed Lauda’s old car when the brakes failed on a bend. Oops! Insta360 evidently thought it best to leave the unfortunate accident out of the video, but you can catch it below (look carefully and you’ll spot Insta360’s One RS camera attached to the car).

The Monaco Grand Prix is famous for its uniquely challenging circuit that incorporates the city-state’s narrow streets and pushes the drivers’ skills to the very limit. The footage manages to convey some of the tight maneuvers that competitors need to make along the circuit, and also shows why it’s so hard for cars to overtake.

“Mounted on the car’s nose, side, and rear wing, One X2 and One RS covered all angles, capturing the ride in epic 360,” Insta360 said in a message alongside the video. “Weighing just 27 grams, the tiny Go 2 was used to get up close and personal with Leclerc as he piloted the car around the twisting circuit.”

Absent from proceedings was Insta360’s recently unveiled Sphere camera, though that’s designed to fit to a drone rather than a racing car.

In Sunday’s race, Leclerc, driving a rather more modern Ferrari than the two cars featured in the video, finished fourth, while Red Bull’s Sergio Pérez crossed the line first. Max Verstappen currently leads the F1 standings, with Leclerc in…