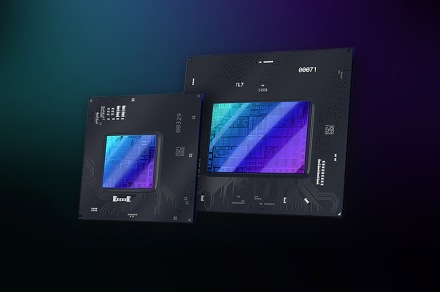 Intel’s flagship Arc GPUs might be right around the corner

If Intel’s drivers are anything to go by, we might be about to see the flagship Arc Alchemist graphics cards in the flesh soon enough — at least in their mobile versions.

Intel’s latest Arc Graphics Windows DCH driver introduces a range of optimizations, including a long-awaited setting. However, the most tantalizing bit of information found in the driver is that it also adds support for two Arc GPUs.

The latest version of Intel’s graphics driver, namely the 30.0.101.1743 Beta, seems like a bit of a spoiler — it adds support for the A770M and the A550M, both of which are laptop GPUs from the Intel Arc Alchemist lineup. This would mark a huge change, seeing as up until now, Intel has only introduced the entry-level A300 family, both in its laptop and desktop forms.

Laptops with Intel Arc have had scarce availability so far, and the desktop version was released in just one flavor — the Intel Arc A380, which also includes a custom version with slightly higher clock speeds. The desktop Arc GPU is only available in China for the time being, but Intel plans to roll it out globally. Hopefully, by the time it hits the global market, its performance might be improved — perhaps through a new driver release. Based on the benchmarks that are currently available, the card fails to impress. For that reason, it would certainly be good for Intel to roll out better versions of Intel Arc to try and win over some customers before Nvidia and AMD hit the masses with the next-gen RTX 4000 and RDNA 3 graphics cards.

While the Intel Arc desktop graphics cards are likely going to be the main event, today’s driver release pertains only to the mobile versions made for gaming laptops. The Arc A770M was recently spotted in a laptop paired with an Intel Alder Lake-H processor, adding weight to the assumption that Intel might be releasing these GPUs soon.

The Intel Arc A770M and A550M were both previously mentioned in a resource file built into an earlier Intel driver, so clearly, they must have moved up from a mere mention to an official part of the driver.

Aside from the tantalizing mention of Intel’s…