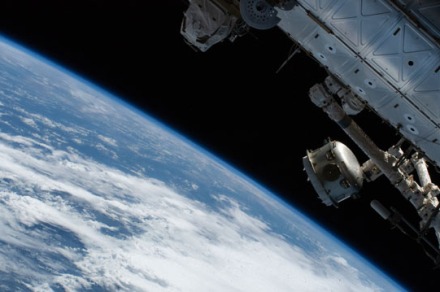 International Space Station has new way to dispose of trash

Even astronauts on the International Space Station (ISS) have to take out the trash. Traditionally, garbage from the space station has been loaded into the cargo spacecraft that bring supplies to the station and stay docked there. Then the cargo ship is released to burn up in the atmosphere, with the trash inside. But now, the station has a new method for getting rid of trash — by shooting it out of an airlock.

The new trash disposal system makes use of an airlock called Bishop, part of a commercial module added to the station in 2020. The company Nanoracks which built the module, along with Thales Alenia Space, and Boeing, oversaw the release of trash from the airlock for the first time last weekend, on Saturday, July 2.

When the trash leaves the airlock it will burn up in the atmosphere, so it won’t add to the problem of space debris. The trash is put into a special waste container that can hold up to 600 pounds of garbage, and which is mounted in the airlock. The test performed last week was recorded in video footage and shared by Nanoracks, and you can see the trash floating away from various views below:

The containers were loaded by Jessica Watkins of NASA and Samantha Cristoforetti of ESA (European Space Agency), and NASA’s Kjell Lindgren and Bob Hines helped to close the hatch and depressurize the airlock.

The hope is that this method of garbage disposal will be more sustainable, as well as more efficient than the current system because the astronauts don’t have to hang onto their garbage until a cargo ship is scheduled to be deorbited. Instead, they can dispose of trash like foam packing materials, dirty clothes, or hygiene products when they are ready.

“Waste collection in space has been a long standing, yet not as publicly discussed, challenge aboard the ISS,” said Cooper Read, Bishop Airlock program manager at Nanoracks, in a statement. “Four astronauts can generate up to 2,500 kg of trash per year, or about two trash cans per week. As we move into a time with more people living and working in space, this is a critical function just like it is for everyone at…