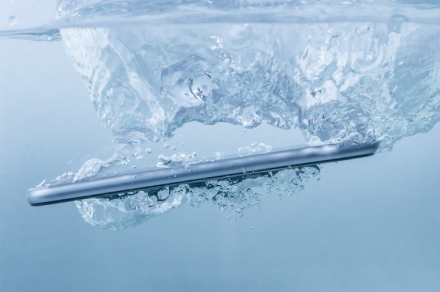 iPhone lost in river for 10 months reunited with owner

Apple says that its most recent iPhones are built to handle up to 30 minutes in up to six meters of water.

So imagine Owain Davies’ surprise when he discovered that his own iPhone still worked after lying submerged in a river for 10 months.

Perhaps even more remarkable is that the phone was recovered and handed back to Davies, who had long given up hope of ever seeing it again after losing it on a canoeing trip in Gloucestershire, England, last summer.

Miguel Pacheco found Davies’ iPhone while out boating with his family. Sharing the remarkable story with the BBC, Pacheco said the phone looked in bad shape and so he was convinced it would never power up. However, thinking that it might have content on it that was important to the owner, he took the handset home, dried it out, and put it on charge.

To his astonishment, the phone powered up.

The iPhone’s screensaver showed the date of August 13, the day the device fell in the water. It also showed a photo of a young couple. Pacheco posted the image on social media, and following thousands of shares, the owner’s identity was eventually confirmed.

With the phone now back in his possession, Davies explained that he lost the device when he toppled into the water after trying to stand up in his canoe.

“The phone was in my back pocket and as soon as I was in the water I realized the phone was gone,” he told the BBC.

In a similarly remarkable story from six years ago, a man’s iPhone 4 somehow survived 18 months — yes, 18 months — submerged in an icy lake, though the tough case that it was in may well have helped.

More recently, a man took drastic action and dived into freezing water to rescue his iPhone, which he’d dropped a few hours earlier. A passer-by captured a video of the dramatic moment the owner jumped into the water to retrieve his handset. And yes, it still worked.