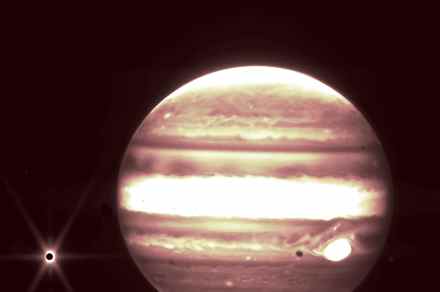 The James Webb Space Telescope has made headlines this week with its ability to look deeper into the universe than ever before, but it will also be used to look at some targets closer to home. As well as distant galaxies and far-off exoplanets, Webb will also be used to investigate objects right here in our solar system — and one of the first research projects it will be used for will study Jupiter and its rings and moons.

Now, NASA and its partners, the European Space Agency and the Canadian Space Agency, have demonstrated how capable Webb is of studying Jupiter by releasing the first images it has taken of targets in our solar system. The images show the iconic stripes of Jupiter as seen in the infrared, and also show up some of the moons of Jupiter like Europa which is clearly visible below:

“Combined with the deep field images released the other day, these images of Jupiter demonstrate the full grasp of what Webb can observe, from the faintest, most distant observable galaxies to planets in our own cosmic backyard that you can see with the naked eye from your actual backyard,” said one of the researchers who worked on the images, Bryan Holler of the Space Telescope Science Institute, in a statement.

All of these images were taken using Webb’s NIRCam instrument, but with different filters which pick out different features. In the 3.2- micron filter on the right below, for example, you can more clearly see the moons Metis and Thebe as well as the larger and brighter Europa.

“I couldn’t believe that we saw everything so clearly, and how bright they were,” said Stefanie Milam, Webb’s deputy project scientist…