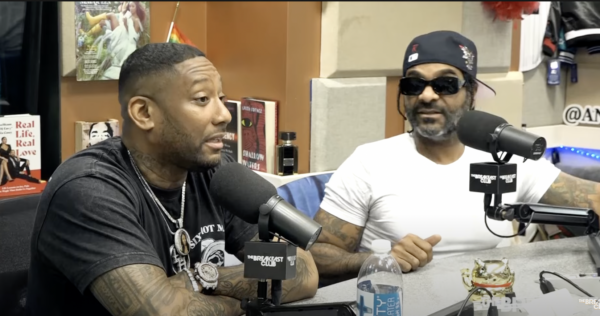 Rappers Jim Jones and Maino, two artists with reputable roots in the street, have added their voices to the growing controversy around law enforcement using rap lyrics to build cases against suspects.

The Lobby Boyz, a supergroup formed by the two veteran emcees, visited Power 105.1 FM’s “The Breakfast Club” with DJ Envy and Angela Yee. The two were asked specifically about Atlanta rappers Young Thug and Gunna being indicted on RICO charges and the prosecution using their lyrics as evidence against them.

Maino, the Brooklyn rapper who burst on the scene with the song “Hi Hater” and was sentenced to five to 15 years in prison for a drug-related kidnapping, believes it’s wrong to take lyrics at face value because rappers are often just creating fictional narratives to make a song good.

He explained, “When you rapping, you rapping from a perspective… I say all kinds of crazy s**t sometimes when I rap… I say yo, ‘woke up in the shade room, shorty took me home, I licked her p**y in her kids’ room.’ I never did it … It’s just a bar. It shouldn’t be literal.”

“It shouldn’t be taken out of context as it being so literal. Some of these [lyrics] are just bars,” he continued. “We saying things that come from things we might have seen or just some ill s**t to say.”

For the Diplomat, he suggested the same consideration given to Hollywood actors and directors, should be extended to artists, who are painting a picture of realities they are familiar with.

The Vamp Life rapper said, “Quentin Tarantino hasn’t been locked up or put on trial for any of the movies he’s made yet. ‘Goodfellas’–none of them. Robert De Niro hasn’t been up on the stand for none of the killings he’s done in movies.”

While the Breakfast Club conversation regarding “lyrics being used as evidence” was focused on the two YSL artists, Young Thug and Gunna, this phenomenon is a tool being used by prosecutions in multiple cities against multiple artists.

In the Bronx, the District Attorney Darcel…