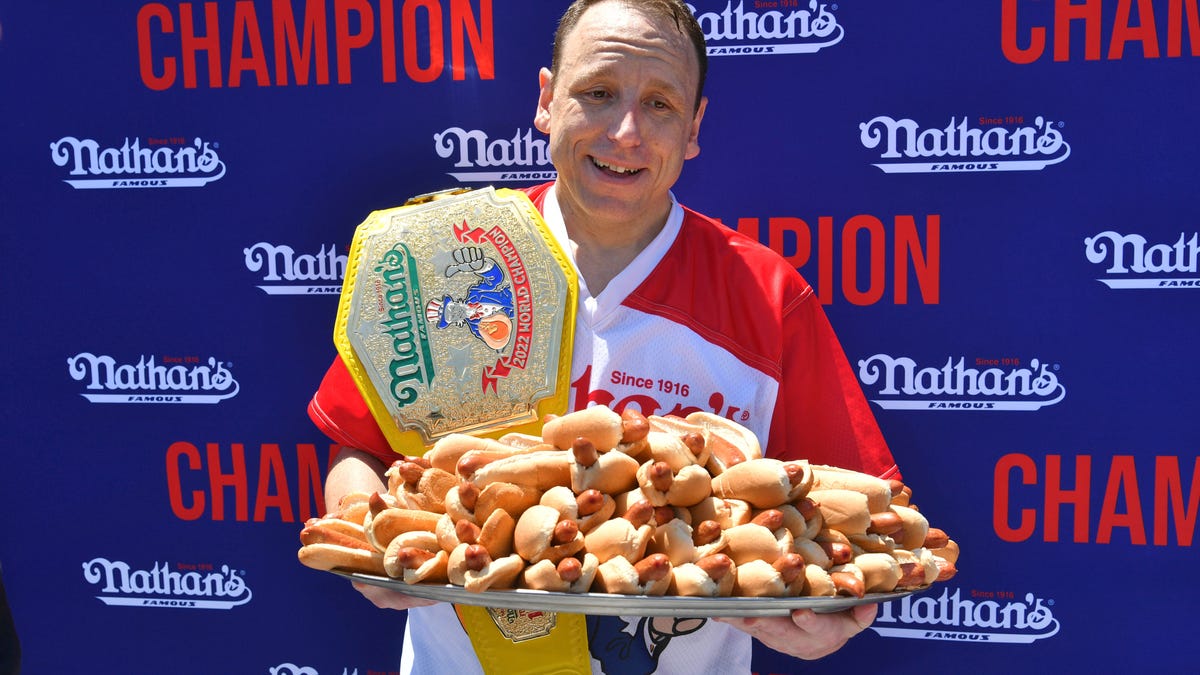 Just as the Founding Fathers would have wanted, Joey Chestnut maintained his title as America’s Hot Dog King this weekend, capturing his 15th title at Nathan’s Hot Dog Eating Contest on Monday. But he hasn’t let his continued success make him lazy or entitled — no, his instincts are sharp as ever as he multitasked his way through scarfing down 63 hot dogs in front of an adoring crowd, taking down a stage-stormer while he did it.

As a protestor ran onto the stage in a Darth Vader mask, holding a sign that read “Expose Smithfield’s Deathstar,” Chestnut, mid-bite, put the guy in a chokehold and sent him to the ground while continuing to shove glizzies down his gullet. While he easily outpaced every other schmuck in the competition, he didn’t come close to beating his own personal record of 76 dogs in 10 minutes, delayed by his self-defense maneuver.

The DraftKings sportsbook actually had to refund over/under bets on the 74.5 hot dog line (what’s more American than gambling on hot dogs?) due to the incident, although one wonders whether that takedown should have added a couple more dogs onto Chestnut’s final tally.

Get hench
Can be used for up to fifty different exercises, has weights that go up to 210 pounds of resistance, can be upgraded if you ever start to get too strong for it, and even comes with some suggested exercises on a handy placard.

Chestnut hasn’t had a real rival since the early retirement of Takeru Kobayashi, whose story we also told this weekend in our coverage of the greatest sport that the Fourth of July has to offer (jumping out of the way of the fireworks your uncle brought to the backyard came in at a close second).

The protest was reportedly organized by animal rights activist group Direct Action Everywhere, who you might remember from the NBA playoff demonstrations that included a woman gluing her hand to the court at a Timberwolves-Clippers play-in game. They’re certainly grabbing headlines — I’ll give ‘em that.