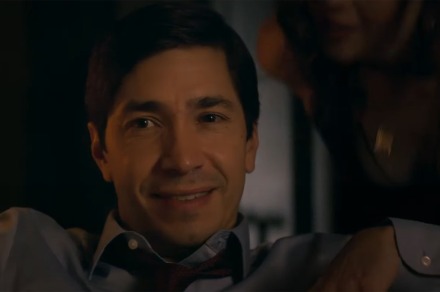 Modern dating often boils down to a single question: Can you trust your partner? Even if it’s for something as tawdry as a one-night hookup, you can usually be reasonably assured that the man or woman you’re going home with is not some horrible creature of the night who is out to suck the blood from your veins. Usually. Such is not the case in Saban Films’ new horror flick, House of Darkness. Justin Long is playing a single guy whose name is not mentioned in the first trailer. But he soon finds himself in an increasingly dire situation.

That’s the thing about living in a horror story: By the time you’ve realized what’s happening, it’s already too late. Long’s character thought that he had a real shot with Mina (Kate Bosworth). After all, taking Mina back to her secluded home suggests pleasurable possibilities. But then Lucy (Gia Crovatin) shows up, and then Nora (Lucy Walters). Suddenly, it dawns on Long’s single man that he is no longer in charge of his own fate. And judging from the pile of shoes that he spots, he’s far from the first victim as well.

The trailer promises that this film is a re-imagination of Bram Stoker’s Dracula, but that kind of gives away the game, doesn’t it? And after the trailer worked so hard to keep any and all vampire imagery out of the frame. But consider this: Mina and Lucy were two of Dracula’s victims in the novel. And the way they behave around Long’s character suggests that they might be brides of a vampire. Or perhaps they are modern undead gals who aren’t encumbered by their own Count Dracula.

“Justin Long and Kate Bosworth star in this seductive thriller from director Neil LaBute (The Wicker Man). Driving home to her secluded estate after meeting at a local bar, a player out to score thinks his beautiful, mysterious date will be another casual hook-up. While getting acquainted, their flirtation turns playful, sexy, and sinister. Hoping to get lucky, his luck may have just run out.”

Neil LaBute wrote and directed House of Darkness, which will hit theaters in limited release…