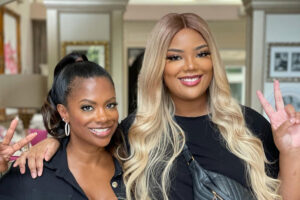 One downfall of being in the public limelight is the onslaught of criticism usually directed at famous people.

Real Housewives of Atlanta reality star Kandi Burruss knows this all too well. In an exclusive interview, the Xscape vocalist told People how infuriated she feels that fans have attacked her daughter’s weight issues and said, “it boils my blood.”

The online bullying and the comments directed toward her 20-year-old daughter Riley have been “really terrible,” Burruss said. Being in the entertainment industry for more than 20 years, Burruss has developed tough skin, but like a mama bear, she balks at criticism regarding her kids.

“I despise it. It bothers me so much,” Burruss tells People.

“Everybody already knows that Riley dealt with her weight issues growing up in the public eye. People would make comments on her body and say things about her personal look and it really boils my blood.”

“You can deal with anything for yourself, but you don’t want your kids to be bullied online. It’s just really terrible.”

Burrus isn’t the only reality TV personality whose child has dealt with online bullying.

Recently, The Real Housewives of Beverly Hills’ Garcelle Beauvais‘s son talked about his bullying experience, and even Bravo had to issue a statement chastising those who felt the need to speak ill of and toward him.

“We are shocked and appalled at the social comments directed at Garcelle’s son. We urge our viewers and social followers alike to refrain from targeting our cast and their families with hateful rhetoric.”

Burruss also stated that she had contacted Beauvais about what she and her son are also going through.

“The people who watch our show and who are on our show, sometimes they take things too far, and it’s not cool. It’s crazy. This is a TV show at the end of the day.”