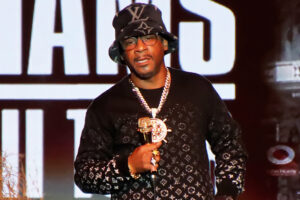 Comic legend Katt Williams believes he may have some blame for people believing it’s acceptable to attack comedians.

In a recent interview with Okayplayer, the 50-year-old comic recalls a 2018 altercation with Lamorris Smith, husband of former V103 radio personality Wanda. Williams, a guest of the Frank Ski and Wanda Show, began exchanging playful insults with the host, until they stopped being playful. The back-and-forth came to a halt once Lamorris stepped in and they exchanged their own words.

According to Williams, the host’s husband allegedly pointed a gun at him; however he later retracted his statement.

He says, in hindsight, he should have reacted in a way that ensured a stop to harassment.

“When we allow the situation where I was talking with a comedian and we were roasting each other — even though I didn’t call her out of her name or do anything degrading — it was still okay for her 400-pound husband to come later with a gun and try to end my life,” said Williams.

But because he didn’t want to ruin their family by having authorities involved, Williams said, “It starts to create a culture where it says you can hurt [comedians]. We should be protected. So I wasn’t able to voice it appropriately and when things are in the atmosphere and they don’t get tended to, it’s a snowball effect.”

The Friday After Next actor alludes to the recent attacks against Chris Rock at the Oscars and subsequently Dave Chappelle at the Hollywood Bowl.

He continued, “So now a comedian is somehow being deemed as deserving of it or, ‘Oh, well, you said such and such so that equals this,’ but we don’t have any words or collection of words that equal violence.”

The self-proclaimed “public official” of comedy goes on to say that freedom of speech is what is being attacked, not comedy. And currently the meaning to the First Amendment is constantly changing, suggesting that the Jan. 6 Capitol riots were due to the fact that the rioters will point to the Constitution and say that is their right.