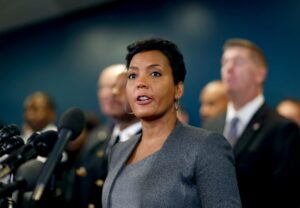 Former Atlanta Mayor Keisha Lance Bottoms is joining the Biden administration in a senior role with the White House Office of Public Engagement.

The former mayor, who left the post after one term, announced the news on Instagram Tuesday and will succeed former Congressman Cedric Richmond who left the post earlier this year. The White House Office of Public Engagement serves as a bridge between the Biden-Harris administration and the American public.

Axios reports Lance Bottoms will be responsible for navigating divergent policy goals between progressives and centrists ahead of what could be a contentious midterm election cycle for Democrats. Lance Bottoms is likely to have a direct line to President Joe Biden and Vice President Kamala Harris and could become one of the public faces of the administration. She will also have access to some of the highest-level planning and strategy sessions in the White House.

Lance Bottoms said in the new role she plans to do “more listening than anything.”

Lance Bottoms was one of Biden’s earliest supporters in 2019, more than a year before the presidential election. She also stumped for the president during the Iowa Caucus and was considered for the vice president post before Harris was selected.

After Biden was elected, he offered Lance Bottoms a position in his cabinet, but she turned it down. Biden also hosted a fundraiser for Lance Bottoms before she announced she wouldn’t run for reelection. During her time as Atlanta mayor, she had to deal with a citywide ransomware attack, the Black Lives Matter protests, and the COVID-19 pandemic, which led to constant fights between her and Gov. Brian Kemp over mask mandates in schools and indoor establishments.

Before joining the White House, Lance Bottoms served as a political contributor for CNN.