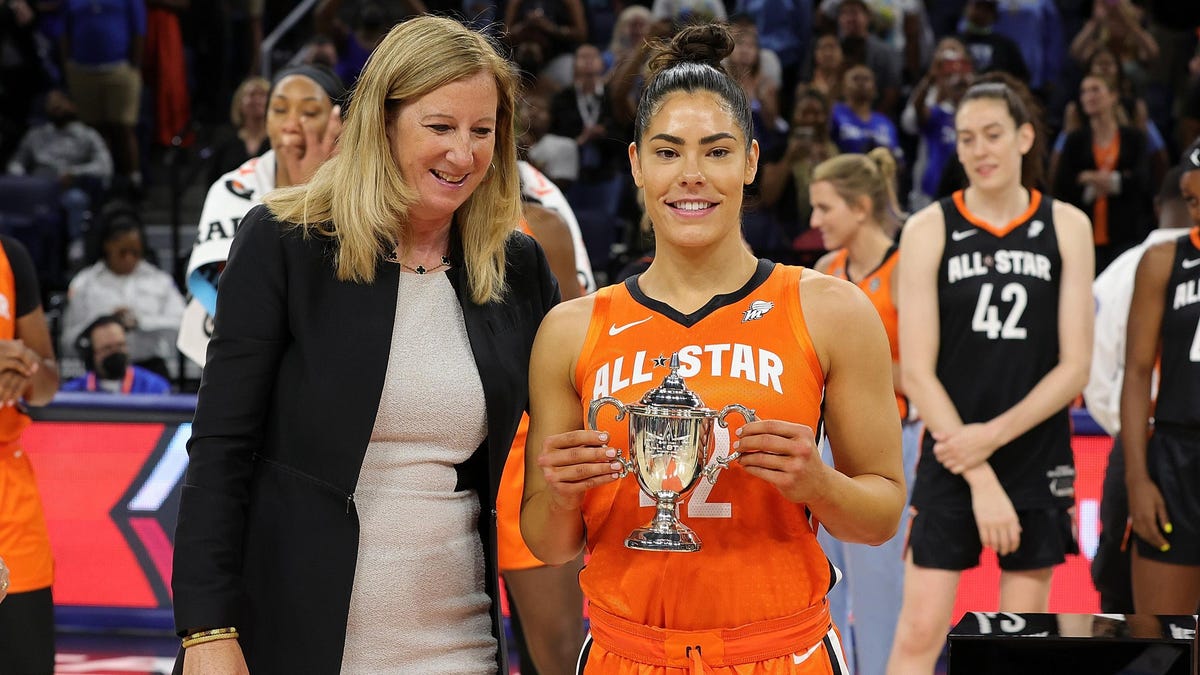 What exactly is going on here?Image: Getty Images

Over the past few days, there has been a picture floating around social media that — while funny and lighthearted — is a prime example of the imbalance of power and money that exist between the WNBA and the NBA. It’s a photo of Kelsey Plum holding up her trophy after WNBA Commissioner Cathy Engelbert presented it to her. For the sake of context, in her first All-Star Game — in which she was named a starter — Plum was the best player on the floor as she tied the record for most points scored in a single WNBA All-Star Game, matching Maya Moore’s 30 points from 2015.

And what did she get for accomplishment?

A trophy that resembles a teapot from a child’s first play set. Mind you, this happened just days after the NBA announced that the winners of their summer league would be receiving gaudy rings that resemble something that’s awarded to the winner of the NBA Finals.

Two things: First, the NBA’s decision to give rings to players who may never play a second in an NBA regular-season game is a clear example of why “participation trophy society” needs to cease and desist. Also, it’s a reminder of how much better the NBA is at rewarding their All-Star Game MVP. (Click this link to see their trophy.) Second, you know it’s bad — and funny — when Plum’s teammates have even gotten in on the joke, as they took to social media to mock the trophy presentation using a juice box in its place, given that they’re similar in size.

Last fall, NBA Commissioner Adam Silver announced that the league was estimated to record $10 billion in revenue after back-to-back shortened seasons due to the pandemic. And according to Forbes, the Memphis Grizzlies are the least valued team in the NBA at $1.5 billion. Those numbers are important to keep in mind when you remember that the NBA is 50 years older than the WNBA and that the longest-running women’s professional league has an annual revenue of around $60 million. The W raised $75 million earlier this year to ramp up their business model. It makes sense why one…