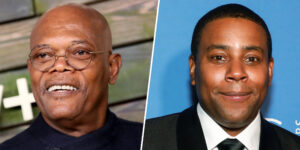 Kenan Thompson dropped by the Tonight Show to clear the air about honorary Academy Award winner Samuel L. Jackson‘s supposed ban from Saturday Night Live. Jackson has not appeared on the popular sketch comedy show for the past ten years and blames Thompson for his banishment, according to the Huffington Post.

“I don’t have the authority to do that,” Thompson said to host Jimmy Fallon. “I don’t know why he thinks that,” admitting that Jackson has been “mad at me” since their 2012 “What Up With That?” skit.

The Last Days of Ptolemy Grey star allegedly dropped an F-bomb on live television twice but said the All That actor was to interrupt him before he went “full trained at it,” as Thompson describes.

“When he did it the first time, I was processing, like, ‘Oh snap, he did it and I didn’t make it or whatever, I didn’t cut him off in time.’ That just happened. […] But we kind of expect the f-word out of Sam Jackson, so no harm done. But then he doubled down and said it again, and I was like, ‘Yo, my man, we gotta pay for those.’”

However, Thompson turned to look straight into a camera and assured the Pulp Fiction legend that he is welcomed with open arms back to SNL.

“Hey, Sam. It’s all good, bro. You’re welcome anytime, from what I’ve been hearing. He’s been mad at me for that, so my bad, bruh, you know what I’m saying? I didn’t think he was gonna do it like that, but…come on in whenever you want. It’s Sam Jackson, who doesn’t want Sam Jackson on the show?”

Washington emphasized that Jackson was long overdue for receiving the coveted award by saying he is the only actor who holds the record of the most outstanding total box office gross of all time, bringing in about $27 billion worldwide during his illustrious career.

“So I’m really, really proud to receive this statue,” he said thanking the Governors for the acknowledgment….