BREAKING NEWS
GMT-4 05:56
Home Black Global Kennedy Agyapong Says He Will Not Take A Salary When He Becomes President 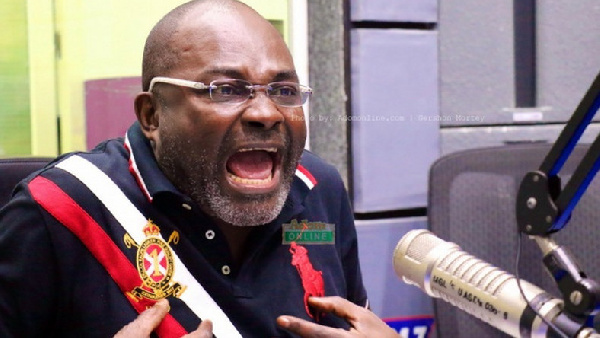 Kennedy Agyapong, the Member of Parliament for Assin Central has made his first promise as he strives to convince Ghanaians of his competence as president of the country.

Kennedy Agyapong said when given the nod as president of the country, he will forfeit his salaries and other financial benefits associated with the office of president.

Kennedy Agyapong in an interview with The Announcer newspaper said that he will convert his salaries into an education support fund for less-privileged people in the country.

On how he will survive, Kennedy Agyapong stated that he will fall on his companies to feed him and his family during the period.

“I will establish presidential scholarship to make sure poor but brilliant people get access to schools. My net salary will be used to sponsor children.

Kennedy Agyapong holds that the biggest challenge to his presidential dreams is the competition within the New Patriotic Party.

He is confident that John Mahama of the National Democratic Congress will be no match for him if he is given the approval by his party.

“No turning back. We are contesting. I’m contesting and won’t turn back. If you bring Mahama, I will beat him hands down,” he said.

He boasted in the same interview that he presents the NPP’s best choice of breaking the two-term phenomenon.

“Yes, it is true. I have decided that when the NPP opens nominations, I will pick a form and file my nomination to contest the party primaries as the flagbearer…I will stand on the ticket of the NPP and nothing will change,” Kennedy Agyapong said in a Facebook live interview with The Announcer Newspaper, Wednesday, May 26.

“When you look at Ghana at the moment, the only person to continue President Nana Addo Dankwa Akufo-Addo’s legacy is me, Kennedy Agyapong and that is the confidence I have.

“If we make a mistake and select any other person apart…