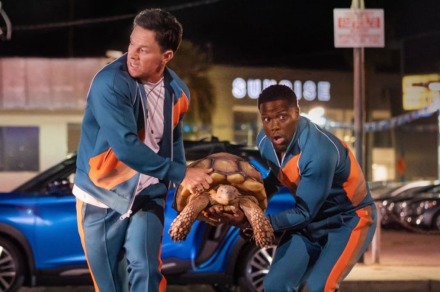 Everyone makes sacrifices when they start a family. Ideally, we’re supposed to become fully realized adults who put the needs of our children ahead of our own while preparing them for the world. But in the first trailer for Netflix‘s Me Time, Kevin Hart‘s Sonny has taken it to an extreme. This stay-at-home Mr. Mom is so devoted to his kids and his family that he’s lost touch with who he was before. But that’s about to change when Sonny reunites with his best friend, Huck, played by Mark Wahlberg.

It’s plain to see in the trailer that Huck really loves Sonny as a friend, and that the feeling is mutual. The comedy comes in the form of Huck’s wild weekend plans that often veer toward incredibly dangerous stunts and locations. When Sonny comes out on top during a fight with a bobcat, he fully embraces Huck’s idea of a good time. Unfortunately for Sonny, the getaway to the desert was only the beginning of the wildest weekend of his life.

“When a stay-at-home dad finds himself with some ‘me time’ for the first time in years while his wife and kids are away, he reconnects with his former best friend for a wild weekend that nearly upends his life.”

Regina Hall also stars in the film as Sonny’s wife, Maya, with Jimmy O. Yang as Stan, and Luis Gerardo Méndez as Armando.

John Hamburg wrote and directed Me Time after previously collaborating with Hart on Night School. Netflix will officially premiere Me Time on August 26.