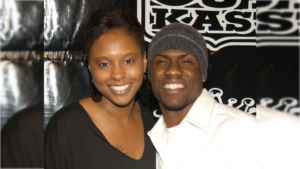 Kevin Hart and Torrei Hart can attest to the saying “time heals all things.” The divorced couple has battled it out in the past before forming an amicable co-parenting relationship.

On The Pivot Podcast, the superstar comedian opened up about rebuilding his relationship with Torrei after their 2011 divorce. Their rekindled friendship is something Kevin credits to “growth” on both their parts.

“You get better. I can credit my ex-wife on growth. Myself, too,” Kevin explained. “It’s not about us, right?”

“There’s a period where your flight blurs things. To the world of raising kids, you gotta realize that ain’t got nothing to do with the s—t that we had, and through the course of the years we’ve gotten better,” he continued. “We’ve become friends, right? We had to learn how to be friends again.”

Kevin and Torrei were married for eight years before calling it quits in 2010. As a married couple, they welcomed two children, Heaven Leigh (born 2005), and Hendrix (born 2007).

They cited irreconcilable differences in the February 2010 divorce filing with Kevin requesting joint custody of their two children. The divorce was finalized in November 2011

In 2016, the Ride Along star married Eniko Parish. Torrei would later accused Kevin of cheating on her with Parish.

Her allegations seemingly rang true a year later when the comedian was caught in a cheating scandal with another woman, as noted by Today. However, as the years passed, Kevin and Torrei came to a peaceful place as co-parents.

Now the Hart to Heart host credits himself for being a present father to his four children. He and Eniko have two children together—a son, Kenzo Kash, and a daughter, Kaori Mai.