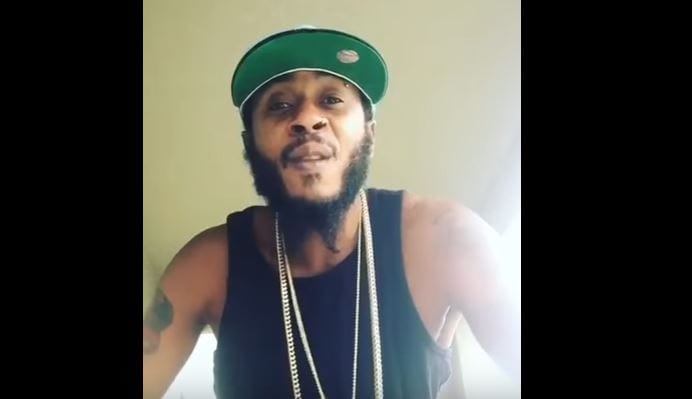 Khago Disses His Wife And His Mother Again – YARDHYPE

Dancehall artiste Khago went on a live rant about women and throw insults at his wife and his mother. During his Livestream, Khago received a call from an unknown female, who described his tone as “aggressive” which did not sit well with the entertainer. This triggered Khago, who called women “Lucifer”, to go on a rant explaining to his viewers that the “dog shit” hang up after telling him he sounds aggressive.

“A work mi come yah so fi work enuh. Yuh tink mi a look nu cratches again,” he said while explaining his lack of interest in women as his focus was solely on himself and his work.

The ‘Blood a Boil’ singer stressed that he did not want any love from anyone, arguing that women are the downfall of men. He also said if homosexuality was not a sin, it would be better to be gay rather than be with a woman.

“It look like if a neva sin it better a man walk off and put a ring pan a next man finger. Ladies that is how much unnuh mek man start despise unnuh.” he continued, explaining that due to the dislike men are developing for women, they are now being used only for sex.

The artiste even called his mother a “bitch” as he stated that he would never be with a woman like her who kept him from his father. Khago, who expressed that he felt like a father could fill a missing piece of him, he also told his viewers that he too is an ignorant “dog shit”, but he couldn’t tolerate certain things.

In what seems to be a response to a comment, Khago told his viewers he didn’t care who his wife, Francine, was having sex with. In his argument, he mentioned that his wife had two children before they met and, unless she found Jesus, he wouldn’t be jealous.

“She nu care who me wah fuck so why mi fi care who she wah fuck?” he asked. “If mi nu care if my madda bloodclaath dead, a my wife mi ago care if my wife live or dead?” khago also detailed that he would rather marry Shebada than another woman, to prove his point.