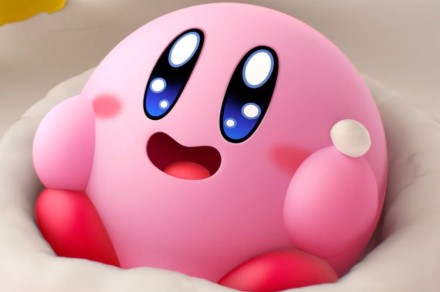 When you return to the home plate after finishing any competition — Gourmet Grand Prix, Single Race, Single Minigame, or Single Battle Royale — for the first time, you’ll get a chocolate-covered vinyl record-style cookie containing a trio of songs from Kirby and the Forgotten Land, complete with a message thanking you for playing the game. The track list includes the theme song Welcome to the New World!, the song that Kirby cruises along to in car form early in Forgotten Land.

The Kirby and the Forgotten Land songs won’t be the only tracks on your party playlist. If you happen to own other Kirby titles for the Nintendo Switch, Kirby’s Dream Buffet will also gift you three bonus songs each from those games to play to your heart’s content while gobbling up every strawberry in sight. The additional melodies will come from Kirby Star Allies, Kirby Fighters 2, and Super Kirby Clash.

Meanwhile, Nintendo announced that Kirby and the Forgotten Land is offering players 300 Star Coins and four food items when you use the Present Code “DREAMBUFFET.” You can use this code between now and September 17. It’s all a sweet way to cap off Kirby’s 30 anniversary, which Nintendo has been celebrating this year through various releases.