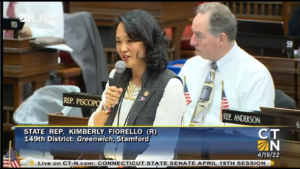 CT Insider reports the Connecticut House passed legislation Wednesday to establish Juneteenth as the 13th state holiday in a 148-1 vote. The one defector was Rep. Gale Mastrofrancesco (R-Wolcott), who objected because it could mean another day off for state employees.

During a two-hour debate on the bill, several Black lawmakers rose to rebuke comments made by Fiorello, a Korean immigrant, including that “since the time I have been here, I have seen a focus on race that I think is unhealthy.” Additionally, during a discussion of the founding fathers’ attitudes toward slavery in which, Fiorello called the three-fifths compromise a step “towards freedom” pushed by northern states.

The comments led to a litany of speakers who pushed back against Fiorello.

“The fact that Black people — men, women, and children — were not seen as whole human beings for the purposes of taxation and representation, that is what the Three-Fifths Compromise was rooted and grounded in,” Rep. Robyn Porter (D) said, surrounded by her Democratic colleagues.

“Us being recognized as whole human beings, I hope that is what this holiday will bring.”

Black lawmakers in the state who spoke during the debate cast Juneteenth as serving multiple purposes. A celebration of Black resilience and a reminder of the racial disparities that still exist today in education, healthcare, housing, and banking.

“My great-great grandfather beaten, his father killed. Family members sold from one plantation to another, never understanding the true identity of their culture, of their existence. There is no price that you can put on the lives lost, on the bloodshed, on the history unknown. And that is why Juneteenth is so important.”

According to the CT Mirror, Fiorello, who graduated from Harvard, said she sees Juneteenth as an…