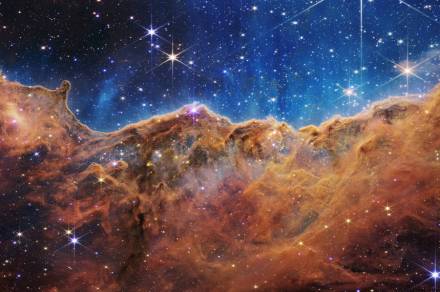 Listen to the sounds of space with James Webb sonifications

While we’re all used to marveling at beautiful pictures of space, in recent years NASA has been experimenting with sharing the wonders of space in another way: through sound. With sonifications, data from space images are translated into audio clips to give a soothing, ethereal way to experience the marvels of the universe.

NASA and its partner agencies recently released a series of sonifications of the famous first images from the James Webb Space Telescope, including the sounds of two nebulae and an exoplanet.

The beautiful Carina Nebula image has been translated into several sonifications, showing off the winding, undulating sounds of its “cosmic cliffs,” the sparkling light plinks of its “sky,” and the avant-garde irregularity of its stars.

Further sonifications include the sounds of the Southern Ring nebula, as well as the eerie sound of the transmission spectrum of the atmosphere of exoplanet WASP-96 b.

The original idea of the sonifications was to help blind or partially sighted people be able to appreciate space data, but they have proved popular with other members of the public as well.

“Music taps into our emotional centers,” said musician and physics professor Matt Russo, who worked on the Webb sonifications, in a statement. “Our goal is to make Webb’s images and data understandable through sound – helping listeners create their own mental images.”

The sonifications are created by picking out particular features of an image or data set and transposing this information into sounds. Previous sonifications have used different methods like radar-shaped sweeps around images or starting in the center of an image and working outward.