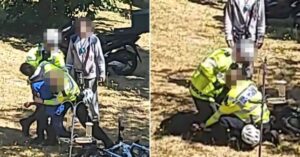 Stills from cellphone footage captured when a Metropolitan police officer repeatedly punched a Black man while another officer held the man down.

Rachelle Henry was inside her home on Friday when she heard shouts from outside her home near Beacon Lane, Lewisham, Metro UK reports. Upon looking out her window, Henry saw one officer digging his knee into the man’s neck.

She grabbed her phone and started filming as the second officer hit the man “five times either in the torso or the head,” Henry recalled.

“‘What are you doing? Why are you punching him? I can see what you are doing,’” she shouted at the officers before letting them know she was recording them.

Henry rushed outside in her bathrobe to confront the officers in what she says was a “racially motivated” attack.

“As soon as I came downstairs, I saw the officer looking guilty,” Henry said. “He told me I should go back inside and that I shouldn’t be down here.”

“He said he was going to arrest me on obstruction grounds and he kept telling me to shush numerous times,” she continued.

“Eventually, the young man was handcuffed, and then he passed out on the floor. He was in and out of consciousness.”

Metro police claim they stopped the man after receiving reports about a stolen bike. The man and his white friend were approached as suspects.

But Henry claims the two men were not treated the same and says the officers “abused their power” and showed extreme force to only the Black suspect.

“Both officers were on top of the Black man, while the white man was standing on the side, not knowing what to do,” she said. “He kept shouting, “please get off him; it’s his bike; the key is in his pocket.”

After the excessive force, police determined that the Black man was not a suspect and was riding a bike he owned.

“After all the checks, it turned out it was indeed his bike,” Henry said. “This has been caught on camera, but police are not accepting responsibility.

A spokesperson for the Met released a statement without acknowledging any wrongdoing by the officers.

“Officers were responding to information…