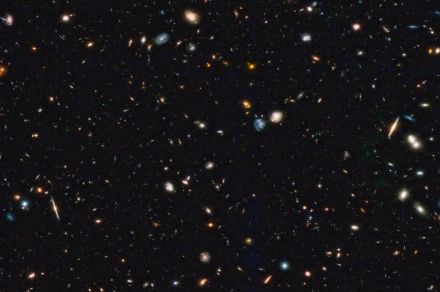 Looking back at the universe’s oldest galaxies with Webb

The James Webb Space Telescope continues to astonish, with early data from one of its survey projects providing a tantalizing glimpse at some extremely distant and extremely old galaxies. Early data from the Cosmic Evolution Early Release Science Survey (CEERS) has been compiled into a stunning view of a field of galaxies including one of the most distant galaxies yet observed. This galaxy could have a redshift of 14, referring to the degree to which light is shifted to the red end of the spectrum by the expansion of the universe.

This image is part of a larger mosaic taken with the Near Infrared Camera (NIRCam) on the James Webb Space Telescope. It’s from a patch of sky near the handle of the Big Dipper. This is one of the first images obtained by the Cosmic Evolution Early Release Science Survey (CEERS) collaboration. NASA/STScI/CEERS/TACC/S. Finkelstein/M. Bagley/Z. Levay

Finding an object with a redshift of 14 is unprecedented, and it indicates that we are looking back at a galaxy that formed within just 290 million years after the Big Bang. This was during a period called the Epoch of Reionization when the hydrogen began to be ionized and the first light shone through the universe.

The finding is also intriguing as it suggests that these very distant galaxies could be more common than predicted, meaning there is a great opportunity for studying them. “These images are exciting because the sheer number of these really high redshift galaxy candidates is larger than we expected,”…