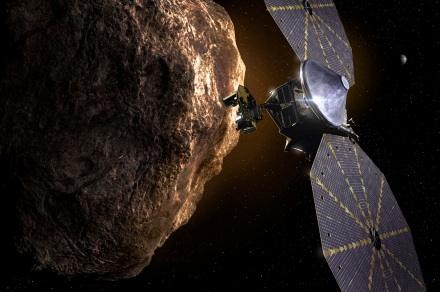 NASA’s Lucy spacecraft, on its way away from Earth and towards the Trojan asteroids, has had issues with one of its two large solar arrays which failed to latch into place following launch. NASA has been working on the problem for several months, and the agency now reports “significant progress” in the deployment of the solar array.

The problem with Lucy was discovered shortly after its launch in October last year. The spacecraft is equipped with two large round solar arrays which harvest energy from the sun to provide power to its system. The arrays were folded up for launch but had to be deployed once the craft was in space, for which they folded out in a clock-like manner. One of the arrays deployed as planned with no issues. But the other array only deployed partway and did not latch into place. Although the spacecraft was getting enough power even with the partially-deployed array, the concern was that when the spacecraft fired its thrusters to perform maneuvers, this would put stress on the array — which was not fully tensioned — and could potentially have broken it.

NASA announced it had a plan to address this issue in April this year, by tightening the lanyard which deployed the array. There are two motors that control this lanyard, one primary and one backup, and it was decided to run both motors together to produce more torque and to tug more firmly on the lanyard, hopefully pulling the array further into position. This process took several rounds through May and June, each time pulling the array a little further into place, although it had still not latched.

Now, NASA reports that the array is almost completely deployed, having unfurled to between 353 degrees and 357 degrees open (out of 360 total degrees). Although it still isn’t latched into place, the array is now under more tension which makes it more stable and more able to handle to forces of spacecraft maneuvers. NASA says the team is “increasingly confident” that Lucy will be able to operate as…