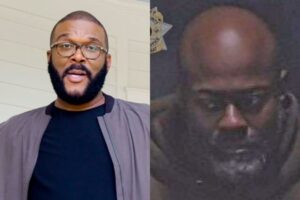 A man was arrested after making calls and leaving voicemails threatening to blow up Tyler Perry’s massive production studio in Atlanta.

After he was denied, a receptionist hung up on Arrasheed after he started speaking gibberish. The receptionist soon realized that he left a voicemail threatening to blow up the Georgia-based studio.

Police tracked down Arrasheed and charged him with a felony. He was released from Fulton County jail on a $5,000 bond. Arrasheed has accused the filmmaker of stealing an idea for a television series about Black Wall Street, Yahoo News reports.

An Instagram account for a Rasheed Coles has been posting about the arrest claiming that there is more to the story.

Perry’s studio is located southwest of downtown Atlanta at the former Fort McPherson military base. The billionaire producer and director turned the former Confederate Army base into a massive production studio that includes 40 buildings, 12 sound stages, and 220 acres of green space.

Perry launched the studio in 2020 with a star-studded event that gave guests a tour of the studios named after renowned Black actors like Oprah Winfrey, Diahann Carroll, Cicely Tyson, and more.

“He didn’t wait for other people to validate or to say you should go this way, or that way. He said: ‘I’m going to create my own way,’ and as we can see here, become a force for himself,” Oprah said.