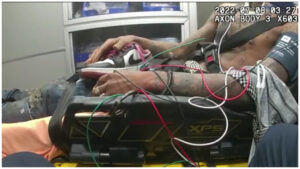 Twenty-nine-year-old Kevin Bynum was in handcuffs after being pulled over by the police for a suspected DUI in Atlanta on July 8 when he ran and jumped from a 60-foot bridge, according to The Atlanta Journal-Constitution.

In a video released by the Atlanta Police Department, Bynum appeared cooperative while being given a field sobriety test around 3 a.m. close to the Northside Drive exit on I-75. After failing the sobriety test, he was placed in handcuffs by an officer from the High-Intensity Traffic Unit. Bynum ran while the officer was looking at his identification.

Bodycam footage captured Bynum running away from the scene as the officer gave chase and threatened to use his taser. Once Bynum passed an interstate sound barrier on the bridge; he jumped over the railing and disappeared into a wooded area. Bynum reportedly fell 60 feet.

“He just jumped over the ramp,” yelled the officer. “He landed … Jesus, radio, it’s like a 60-foot drop. He’s down on the ground. I can’t even tell you where he’s at or where he’s going to come out.”

According to the police report, officers from the Atlanta Police Department and Georgia State Patrol troopers found Bynum in the wooded area and carried him to EMS workers on the scene. He was taken to Grady Memorial Hospital for treatment. The police report noted he suffered minor injuries.

“Traffic stops, at night, on the interstate, are dangerous and often unpredictable,” read the report. “Officers are never certain who they are dealing with and if that driver will cooperate. Add to that the hazards of vehicle traffic on the highway and situations can become dangerous in an instant. No matter how routine something appears an officer may find that the stop is anything but. Fortunately, the suspect had only minor injuries but could have been killed by his reckless actions.”

Bynum was charged with a DUI, obstruction, reckless driving, speeding, and driving without a license.