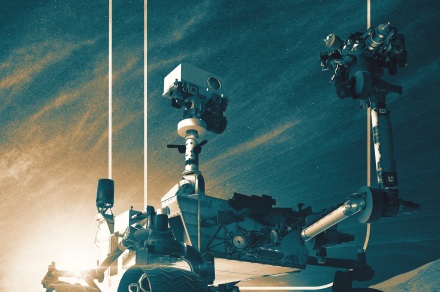 Today NASA’s Curiosity rover celebrates 10 years on Mars, and it’s still going strong since its landing on August 6, 2012. As the first of a new design of Martian rover along with Perseverance, Curiosity has not only provided illuminating scientific information about the history and geology of the planet but has also demonstrated a host of engineering concepts that have made rovers bigger and better than ever before.

When you think of a Mars rover, many people are picturing something small, like the microwave-sized Sojourner which landed on Mars in 1997, or the golf cart sized Opportunity and Spirit rovers which landed in 2004. But Curiosity marked the beginning of much larger rovers, as it and Perseverance are car-sized and significantly heavier than their trailblazing brethren. This increase in size and mass means that newer rovers can carry far more complex scientific instruments, turning rovers from pint-sized explorers which could collect only basic data into mobile laboratories. That principle is where Curiosity got its technical mission name, Mars Science Laboratory.

A poster produced by NASA to celebrate the Curiosity Mars rover’s 10th anniversary on the Red Planet. NASA/JPL-Caltech

A bigger and heavier rover faces a bigger challenge, though, in terms of how it can be landed on Mars. Previous generations of Mars rovers were covered in airbags and essentially dropped onto the surface where they would bounce around before coming to a stop, with air in the airbags protecting them from impacts. But Curiosity’s significant mass made airbags ineffective, so a new landing system was developed.

The sky crane system which delivered both Curiosity and Perseverance safely to the Martian surface works using a jetpack that fires thrusters to slow descent while the rover is lowered on a set of cables. Once the rover has touched down, the cables detach and the jetpack flies away to prevent any tangles between it and the rover. This system helps to place a rover in a specific and predictable location, unlike the unpredictable bouncing of airbags, and it can let down much heavier rovers safely.