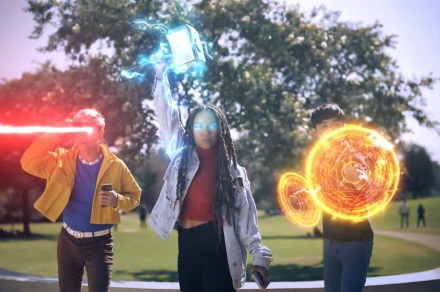 A new augmented reality game from Niantic is on the way, and this time it’s being created in partnership with Marvel and will feature plenty of iconic faces from the comics. The game was announced today during Disney & Marvel’s games showcase and has a 2023 release window.

Niantic is the king of mobile AR gaming experiences. The studio brought the world titles like Pokémon Go and the recently shuttered Harry Potter: Wizards Unite. This is the first time the team is collaborating with the Marvel franchise.

Niantic’s press release for the game describes it as “the first Marvel game where players become their own unique Marvel Super Hero,” noting that “Marvel World of Heroes breaks new ground by extending gameplay into the real world as only Niantic games can. The game is designed to be a social game experience and pits players, their friends, and their iconic Marvel Super Hero allies against Marvel Super Villains and interdimensional threats.”

The press release also states that players will create their own super identity and origin story. Once this is done, they are tasked with patrolling their neighborhoods to “foil crimes, complete Super Hero missions, and thwart interdimensional threats.” In doing this, players will level up and unlock equipment and abilities and team up with actual Marvel heroes like Spider-Man and Wolverine. What is precisely entailed in these tasks of foiling crimes and more is still up in the air.

Players can use their phones to join up with their favorite Marvel heroes in Marvel World of Heroes when it releases in 2023.