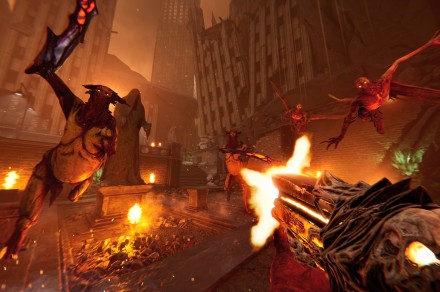 A new month means new games are on the way to Xbox Game Pass for cloud, console, and PC. As always, the new catalog of incoming games includes multiple titles, but the easy highlight of September’s group is Metal: Hellsinger, a new first-person shooter that turns Doom into a rhythm game.

Metal: Hellsinger was originally announced two years ago by its developer Funcom. The game takes players to a hellish world reminiscent of something one would see in the new Bethesda Doom titles. Hellsinger‘s high-octane and heavy-movement gameplay are similar to those games as well. The twist here is that players have to shoot, move, and eradicate the forces of hell to the beat of a hellacious heavy metal soundtrack composed for the game.

Other than that, it’s a lighter start to the month for Game Pass. The Animal Crossing-like Disney Dreamlight Valley is available on the service as of today, but the rest of the list is comprised of curious indie games. Here’s the complete list of games coming to Xbox Game Pass.

Quite a few games are leaving the service at the end of the month too. Notably, A Plague Tale: Innocence is leaving just as its sequel arrives next month. These are the games leaving Game Pass on September 15.