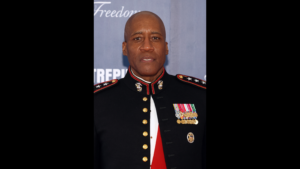 Michael Langley Could Be The First Black Four-Star Gen. In The Marines

Lt. Gen. Michael E. Langley could become the first Black four-star general in the Marines’ 246-year history after being nominated to lead all U.S. military forces in Africa.

The Washington Post reported that Langley will become the Chief of U.S. Africa Command if he is confirmed by the Senate Thursday. The confirmation would make him the only Black man to become a four-star general, something more than 70 white men have accomplished in the Marines’ history.

Black men have attained four-star general status in the Army, Navy, and Air Force, however when it comes to the Marines, a handful of Black men have been named three-star generals, but Black service members saw no one who looked like them in the top leadership positions of the Marines and many wondered whether it would ever happen.

‘“As you looked at the horizon, you saw the end,” retired Lt. Gen. Walter Gaskin, the fourth Black man to be elevated to a three-star general, told the Post. “You didn’t see what was over the horizon because no one was there.”

Langley’s career is an illustrious one. The powerlifter has served in Afghanistan, Somalia, and Japan. He has held top jobs at the Pentagon and led U.S. Marine Corps Forces Europe and Africa. He currently oversees Marine forces on the East coast. Additionally, he set records for how many training courses he wrote and was frequently tapped to mediate workplace disputes.

According to Gaskin, other Black men deserved the fourth star, including Lt. Gen. Frank Petersen, the first Black man to become a three-star general in 1986. Gaskin told the Post Petersen was someone who “no doubt” should’ve been elevated to a four-star general.

One of the reasons Langley’s confirmation is so important to Black men in the Marines is the hard work, dedication, obstacles, and challenges that have been overcome by generations of Black Marines to get to his point.