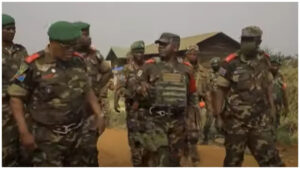 Militia men have murdered 13 people inside a church hospital in the Democratic Republic of Congo, according to Reuters. A Ugandan group of armed men known as the Allied Democratic Forces (ADF) is believed to be responsible for the gruesome deaths.

The attack happened on July 7 at approximately 10 p.m. in the town of Lume in the province of North Kivu, according to witnesses. The men attacked the church hospital and burned several patients to death, including three infants.

“In the hospital ward there were four patients who all burned to death, in the pediatric unit all the mattresses are burned and in the side wards we just collected nine bodies.”

The hospital’s chief Kule Bwenge said several hospital staff members were missing following the firey attack. “Four blocks of the medical center were set on fire. Several sick guards, as well as a nurse, are missing,” said Bwenge. Houses were also burned during the attack in the town 25 miles southeast of Beni in eastern Congo.

A spokesman from the Congolese Army Anthony Mualushay said that the attackers were from a local militia that was collaborating with the ADF. The army reportedly killed three of the attackers and captured one when responding to the attack.