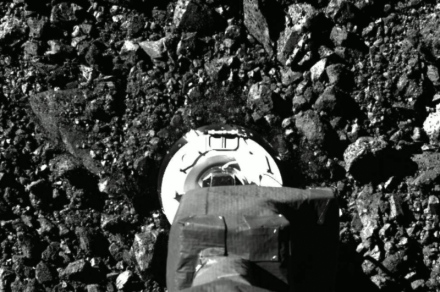 NASA scientists have made what they describe as an “astonishing” discovery about Bennu, the asteroid from which its OSIRIS-REx spacecraft collected a sample of rock and dust in 2020.

The space agency said this week that it turns out that the particles that make up Bennu’s exterior much more loosely bound than expected. In fact, if you walked on them, there would be hardly any resistance, “as if stepping into a pit of plastic balls that are popular play areas for kids.”

NASA revealed the discovery this week after analyzing data gathered during the spacecraft’s brief touchdown on the asteroid two years ago.

As the video below shows, the spacecraft landed on the asteroid before causing an explosion to enable it to gather material. Nine seconds after making contact, the spacecraft fired its thrusters to push it away from the rock below, but NASA said if it hadn’t done so it “would have sunk into Bennu.”

Scientists first understood that Bennu may have a loosely bound surface when it noticed how the spacecraft’s relatively soft touchdown caused a huge amount of debris to fly up. “Even more bizarre was that the spacecraft left a large crater that was 26 feet (8 meters) wide,” NASA said.

The surprise findings were published on July 7 in the journals Science and Science Advances.

“These results add to the intrigue that has kept scientists on the edge of their seats throughout the OSIRIS-REx mission, as Bennu has proved consistently unpredictable,” NASA said.

Indeed, as the space agency notes, Bennu offered up its first surprise when OSIRIS-REx arrived at the asteroid in 2018. Instead of finding a surface resembling a “smooth, sandy beach,” which telescope observations from Earth and space had suggested, the mission team found it was “littered with boulders.”

To work out the density of the asteroid’s surface, scientists analyzed spacecraft acceleration data and images captured during the touchdown process, and then ran hundreds of computer simulations until all of the data matched up.