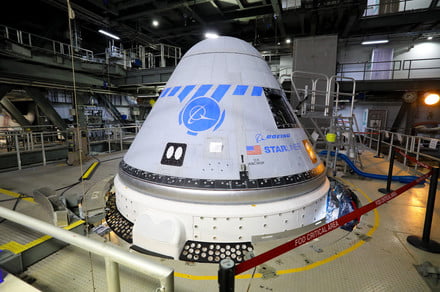 Posted By: adminon: May 11, 2022In: TechnologyNo Comments
Print Email

We’re just a week away from seeing Boeing’s CST-100 Starliner spacecraft blast off from the launchpad at the Kennedy Space Center in Florida in a crucial test flight to the International Space Station (ISS).

In a bid to create some buzz ahead of launch, and to spread the word far and wide about the May 19 mission, Boeing has shared a 113-second time-lapse video (below) showing the spacecraft on what appears to be the easiest journey it will ever have to make.

The footage shows the Starliner being transported from the Commercial Crew & Cargo Processing Facility at the Kennedy Space Center to the Vertical Integration Facility operated by United Launch Alliance (ULA), whose Atlas V rocket will power the Starliner to orbit next week.

We sped up this time lapse so you can see #Starliner&#39;s rollout and stack in under 2 minutes.

Watch from Starliner&#39;s perspective as it heads from our factory to the @ulalaunch Vertical Integration Facility.

Join us for Orbital Flight Test-2 launch on May 19. pic.twitter.com/g2cyviU4Oa

For folks keen to see more of the spacecraft’s trip to the Atlas V rocket, Boeing has also shared an unedited version of the time-lapse, which runs for just over nine minutes.

Next week’s uncrewed mission is hugely important for Boeing as it follows a failed flight in December 2019 as well as a second mission hiccup last August where technical issues meant the Starliner couldn’t even get off the launchpad.

Boeing’s Orbital Flight Test-2 is designed to demonstrate that the aerospace giant has resolved all of the issues and is now able to fly safely to and from the space station.

Starliner is expected to dock at the ISS on May 20, about 24 hours after launch. It will be loaded with more than 500 pounds of NASA cargo and crew supplies. The spacecraft will stay docked at the ISS for between 5 and 10 days before returning to Earth for a parachute-assisted landing in New Mexico, bringing with it around 600 pounds of cargo.

If the mission goes according to plan, it will give NASA another option alongside SpaceX’s Crew Dragon spacecraft…