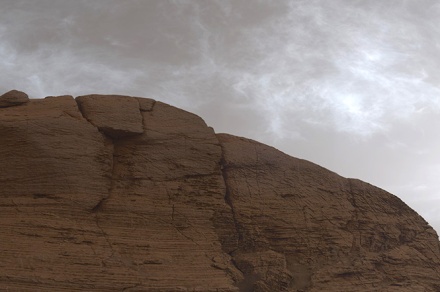 NASA wants your help to solve an enduring Mars mystery

If you have some spare time on your hands and you’re captivated by NASA’s extraordinary exploits on Mars, then how about getting involved yourself by helping scientists solve one of the red planet’s enduring mysteries?

A new project is inviting interested folks to help NASA scientists work out why Mars’ atmosphere is just 1% as dense as Earth’s, a question that’s all the more intriguing as evidence points to the distant planet once having a much thicker atmosphere.

“The air pressure is so low that liquid water simply vaporizes from the planet’s surface into the atmosphere,” NASA said. “But billions of years ago, lakes and rivers covered Mars, suggesting the atmosphere must have been thicker then.”

Marek Slipski, a postdoctoral researcher at NASA’s Jet Propulsion Laboratory (JPL), which oversees Mars missions, said a key part of the study will involve trying to find out what triggers the formation of martian clouds, “especially water ice clouds, which could teach us how high water vapor gets in the atmosphere — and during which seasons.”

Assisting NASA doesn’t involve having to come up with any complex scientific theories on the matter (though NASA would love to hear from you if you do). Instead, the space agency’s scientists want you to join its Cloudspotting on Mars project and sift through data to identify Martian clouds.

According to JPL’s Armin Kleinboehl, there’s plenty of data for folks to analyze — 16 years’ worth, to be precise. Kleinboehl said the “very valuable” data, which has been gathered by the Mars Climate Sounder instrument (MCS) on NASA’s Mars Reconnaissance Orbiter, lets scientists “see how temperatures and clouds change over different seasons and from year to year,” but added that “it’s a lot of data for a small team to look through.”

So the team is calling on you for help.

NASA explains that the MCS studies the planet’s atmosphere in infrared light, which is invisible to the human eye. In the MCS’s data, clouds show up as distinct arches (shown below) — with the peak showing the cloud…