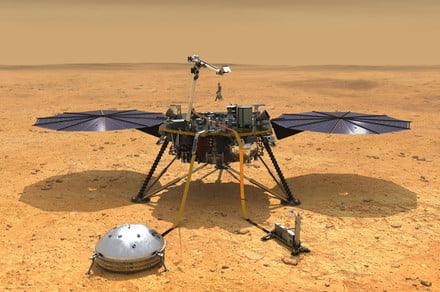 NASA’s InSight lander is set to end operations on Mars after four years of service.

At a special meeting of key InSight mission personnel on Tuesday, May 17, it was confirmed that increasing amounts of dust on the lander’s two 7-feet-wide solar panels meant that it would likely cease science operations by the end of this summer, before completely losing power in December.

Packed with an array of science instruments, InSight has detected more than 1,300 marsquakes — including a recent one measured as the largest quake ever detected on another planet — and also located quake-prone regions of the red planet. Overall, the mission has been a great success, with the lander achieving its primary goals within its first two years of deployment.

“InSight has transformed our understanding of the interiors of rocky planets and set the stage for future missions,” said Lori Glaze, director of NASA’s Planetary Science Division. “We can apply what we’ve learned about Mars’ inner structure to Earth, the moon, Venus, and even rocky planets in other solar systems.”

InSight has been gradually losing power due to an accumulation of dust on its solar panels that has gradually blocked out sunlight. When it arrived on Mars in 2018, the panels produced around 5,000 watt-hours each martian day (a touch longer than an Earth day), but today they’re producing around 500 watt-hours per martian day. Offering some context, NASA says these kind of energy levels would power an electric oven for 100 minutes and 10 minutes, respectively.

The worsening situation means the team is now preparing to place the lander’s robotic arm in its resting position — known as the “retirement pose” — later this month.

It’s worth noting that the arm played a key role in prolonging the lander’s mission as the team deployed it to clear dust off the panels earlier in the mission. The idea, which came about when the team first realized that dust was causing InSight to lose power, involved scooping up martian soil and dumping it on the panels. Windy conditions then blew away the soil, taking some of the dust…