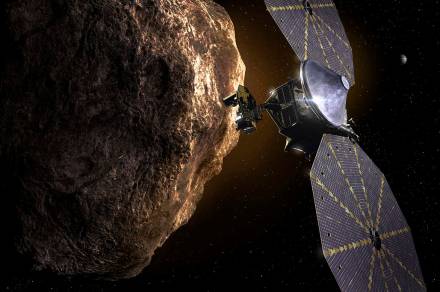 This week’s lunar eclipse wasn’t only observed from the ground and from the International Space Station — it was also observed from 64 million miles (100 million kilometers) away from Earth by the Lucy spacecraft. Lucy, which is an uncrewed craft from NASA and the Southwest Research Institute on its way to study the Trojan asteroids in the orbit of Jupiter, got a view of the lunar eclipse on May 15 and was able to snap images over a period of three hours which have been turned into a time-lapse video:

The images were taken using Lucy’s L’LORRI instrument which captures high-resolution black and white images. It took 86 images in total which were combined together to create the time-lapse.

Even though Lucy is far away from Earth, the instrument was sensitive enough to be able to view the moon as it passed into the Earth’s shadow and was hidden in darkness for a short time.

”While total lunar eclipses aren’t that rare — they happen every year or so — it isn’t that often that you get a chance to observe them from an entirely new angle,” said Lucy’s principal investigator, Hal Levison, in a statement. “When the team realized Lucy had a chance to observe this lunar eclipse as a part of the instrument calibration process, everyone was incredibly excited.”

Lucy was in the vicinity of Earth because, following its launch in October 2021, it was traveling toward the Earth to perform a flyby in October 2022. By passing close to a massive body like the Earth the spacecraft can get a gravity-assisted boost to help take it to its distant destination. During its journey, the team can make use of its instruments like its four cameras to observe phenomena like the lunar eclipse, but this requires some creative scheduling as this isn’t what these instruments are primarily designed for.

“Capturing these images really was an amazing team effort. The instrument, guidance, navigation, and science operations teams all had to work together to collect these data, getting…