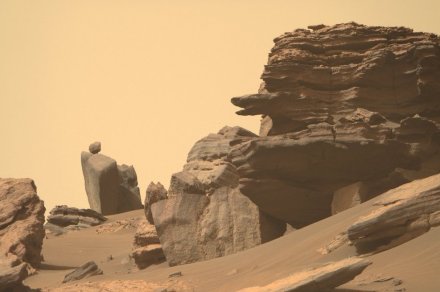 NASA’s Mars rover, Perseverance, has shared some remarkable images of different rock formations at its next exploration site.

The rocks are located in the area of an ancient river delta inside Jezero Crater that scientists believe has the best chance of containing evidence of any past microbial life on the red planet.

In a message posted on Perseverance’s Twitter account, the rover said there were “tons of potential targets for study,” describing its surroundings as “a paradise for rock nerds like myself.”

One particularly striking image (bottom left) appears to show a bolder perched atop a larger rock, while others show in great detail various layered rock formations.

I mean, take a look at some of these close-ups. Tons of potential targets for study. Paradise for rock nerds like myself. pic.twitter.com/0uEHHVvZds

According to the Perseverance team at NASA’s Jet Propulsion Laboratory (JPL) in Southern California, the delta comprises an enormous fan-shaped assortment of rocks and sediment that formed at the meeting point of a river and a crater lake billions of years ago.

It said the delta was the primary reason why the team landed Perseverance in the Jezero Crater last year.

“It has so many interesting features,” said Ken Farley of the California Institute of Technology, which is also involved in the current Mars rover mission. “We will look for signs of ancient life in the rocks at the base of the delta, rocks that we think were once mud on the bottom of Lake Jezero.”

Higher up the delta, Perseverance will be directed to examine sand and rock fragments that came from upstream, possibly from places miles away that the rover will never explore. “We can take advantage of an ancient Martian river that brought the planet’s geological secrets to us,” Farley said.

Perseverance has already collected martian soil from other areas of interest, and during its exploration of the delta it’s expected to gather an additional eight samples. The material will be returned to Earth in another mission, enabling scientists…