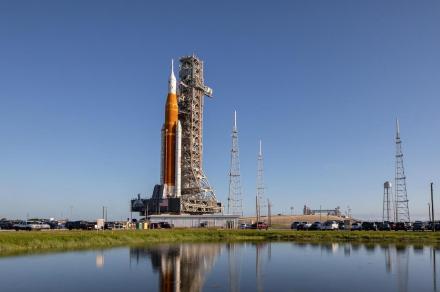 NASA’s next-generation SLS rocket and Orion spacecraft have arrived on the launchpad at the Kennedy Space Center ahead of a second attempt at a key preflight test.

Carried by one of NASA’s low-slung crawler vehicles that moves at no faster than 1 mph, the SLS and Orion vehicles reached the launchpad at about 8:20 a.m. ET on Monday, June 6.

The space agency shared several images of the 332-feet (98.1-meter) rocket in position:

In the early hours of the morning, @NASAGroundSys transported the SLS rocket and @NASA_Orion spacecraft to launch pad 39B for the next wet dress rehearsal test ahead of #Artemis I. Catch a live view of the rocket at the pad HERE &gt;&gt; https://t.co/c4PCzejcLt pic.twitter.com/CE7WIQtsZc

In preparation for the Artemis I lunar mission, the SLS rocket will undergo a so-called “wet dress rehearsal” no earlier than June 19. This important pre-launch procedure involves filling the rocket’s tanks with fuel and performing a mock countdown.

Prior to the rehearsal, NASA engineers will spend some time securing the SLS rocket and mobile launcher to ground support equipment.

This is the second time for the SLS rocket and Orion spacecraft to be transported to the launchpad for a wet dress rehearsal. But after reaching the launchpad in March, a rehearsal in early April was called off after engineers identified a number of technical issues.

As a result, the vehicle was rolled back to the Vehicle Assembly Building so the issues could be addressed.

Once the SLS rocket achieves a successful wet dress rehearsal, the vehicle will be deemed ready for its first mission, Artemis I.

The uncrewed test mission will use the SLS to power the Orion toward the moon. The spacecraft will perform a flyby of our nearest neighbor before returning to Earth.

A successful flight will pave the way for Artemis II, which will take the same path but this…