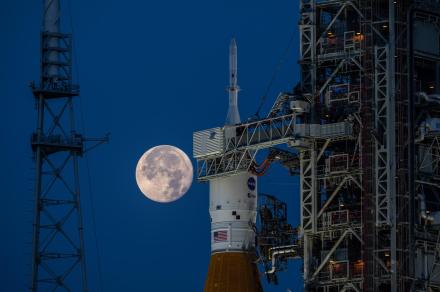 Following a successful test of its fueling capabilities last month, NASA’s next-generation rocket, the Space Launch System, will return to its home at the Vehicle Assembly Building at the Kennedy Space Center in Florida today. The rocket, intended to eventually carry astronauts back to the moon under the Artemis program, could launch for the first time on the uncrewed Artemis I mission in late August or early September.

For the fueling test, called the wet dress rehearsal, the rocket was wheeled out of the Vehicle Assembly Building or VAB and onto Launch pad 39B where it has stayed for the past few weeks. Now, the rocket will head back inside for final adjustments. But moving the 212-foot-tall rocket across the four miles from the launch pad to the building isn’t a simple task, it requires the use of a massive crawler and takes several hours.

Returning the rocket to the building had originally been scheduled for yesterday, Friday, July 1, but was pushed back by one day due to the path along which the crawler travels, called the crawlerway, being uneven. “The inclined pathway must be precisely level with an even distribution of the rocks that make up the crawlerway in order to support the load of the mobile launcher and rocket that it will carry,” NASA explained, so teams spent yesterday leveling out the slope so it could be used by the crawler.

NASA announced that the rocket and crawler left the launch pad at 4:12 a.m. ET this morning, Saturday, July 2, and that it was scheduled to arrive at the building later this morning. You can watch the rocket’s progress either using the video embedded above or by heading to the Kennedy Space Center newsroom YouTube channel.

“Once inside the VAB, teams will replace a seal on the quick disconnect of the tail service mast umbilical to address a liquid hydrogen leak detected during the wet dress rehearsal, along with planned forward work as the Space Launch System and Orion spacecraft are readied for launch,” NASA wrote.

Following the wet dress rehearsal, the hope was that the rocket could launch on its first mission as early as August. This goal was…