BREAKING NEWS
GMT-4 03:18
Home Technology NASA’s plan to save the Ingenuity from the Martian cold 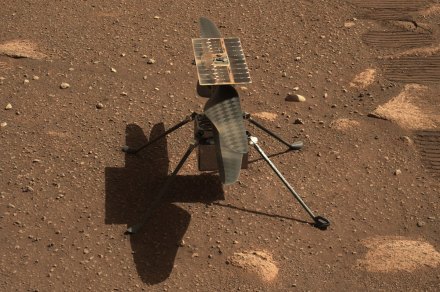 NASA’s plan to save the Ingenuity from the Martian cold

Posted By: adminon: May 29, 2022In: TechnologyNo Comments
Print Email

NASA’s Ingenuity helicopter has captured the world’s affection with its explorations of Mars which have been far more successful than even the most optimistic predictions. But after 28 flights, the helicopter is beginning to suffer from the harsh conditions of the Martian winter.

With seasonal changes on Mars, there is more and more dust in the atmosphere, and that is causing problems for Ingenuity and threatening the helicopter’s future. That’s because dust gets whipped up in the thin atmosphere and settles on the helicopter’s solar panel, which lessens the amount of power it can collect from the sun. The helicopter already experienced an issue where communications with it were lost due to a lack of power, which had caused the helicopter’s internal clock to reset and which meant it missed its check-in with the Perseverance rover.

NASA’s Ingenuity Mars helicopter is seen here in a close-up taken by Mastcam-Z, a pair of zoomable cameras aboard the Perseverance rover. This image was taken on April 5, the 45th Martian day, or sol, of the mission. NASA/JPL-Caltech/ASU

In a NASA blog post, Ingenuity Team Lead Teddy Tzanetos explained that the team expects Ingenuity to have ongoing power shortages throughout the Martian winter, which lasts until September or October.

“Challenges like these are to be expected: After hundreds of sols and dozens of flights beyond the five flights originally planned, the solar-powered helicopter is in uncharted terrain,” Tzanetos wrote. “We are now operating far outside our original design limits. Historically, Mars is very challenging for spacecraft (particularly solar-powered spacecraft). Each sol could be Ingenuity’s last.”

The main threat to Ingenuity is the cold. The heaters which keep Ingenuity warm at night use a lot of power, and as the nights are getting colder they are needed more. But with less power, Ingenuity can no longer run its heaters all night, so some of its components will drop below their nominal temperatures some of the time. This will damage the hardware over time, but it’s hard to predict exactly how long the components will…