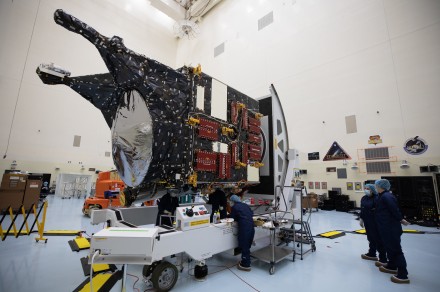 The launch of NASA’s Psyche spacecraft, set to visit a metal asteroid, has been delayed due to a software issue.

As reported by SpaceFlightNow, there was a technical issue during testing which means the craft will not launch as planned on August 1. “An issue is preventing confirmation that the software controlling the spacecraft is functioning as planned,” NASA said in a written statement to Spaceflight Now. “The team is working to identify and correct the issue.”

The launch will be delayed by several weeks, and will now go ahead no earlier than September 20. The launch will use a SpaceX Falcon Heavy rocket and will be from Pad 39A at NASA’s Kennedy Space Center in Florida.

The Psyche spacecraft arrived at Kennedy on April 29 this year, coming from NASA’s Jet Propulsion Laboratory (JPL) in California. After arrival at the Payload Hazardous Servicing Facility in Kennedy, the craft was unboxed from its shipping container, rotated, and prepared for launch. The issue arose during the final preparations for the launch which included reinstalling its solar arrays, testing its communications system, and loading fuel into the craft.

This followed the extensive testing of the Psyche spacecraft at JPL prior to its shipping to Florida. In the “shake and bake” testing, the craft was exposed to space-like conditions to ensure it could stand up to the rigors of launch. This included the shaking that occurs during launch, the jolt of the spacecraft separating from the rocket, the vacuum conditions of space, and the fluctuating temperatures expected during the launch and cruise phases of the mission.

The aim of the mission is to visit the strange metal asteroid also called Psyche, located in the asteroid belt between Mars and Jupiter. Psyche is the only asteroid thought to be composed entirely of iron and nickel, and studying it could help astronomers understand the formation of planets in the solar system. Earth has a metal core, and it could be that Psyche was on the…