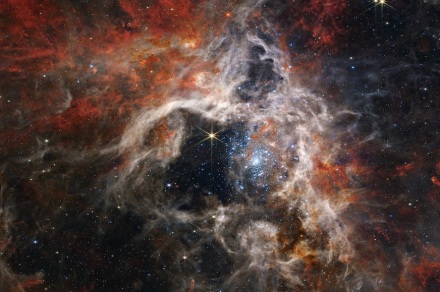 The most powerful space telescope ever built is continuing to send back dazzling images of the universe from its orbit a million miles from Earth.

The James Webb Space Telescope’s latest stunner shows the Tarantula Nebula, described by NASA as “a raucous region of star birth that resides 170,000 light-years away in the Large Magellanic Cloud, a small, satellite galaxy of our Milky Way.”

The Tarantula Nebula earned its name for the dusty filaments that appear in earlier images captured by other telescopes, and is a favorite of astronomers with a special interest in star formation, NASA said. This is because the nebula’s chemical composition and development are similar to the enormous star-forming regions observed at the universe’s so-called “cosmic noon,” a time when the cosmos was just a few billion years old and star formation was at its height.

Also known as 30 Doradus, the nebula’s cavity, which you can see at the center of the image, has been hollowed out by intense radiation from a cluster of huge young stars that appear in the image as blue dots of light.

“Only the densest surrounding areas of the nebula resist erosion by these stars’ powerful stellar winds, forming pillars that appear to point back toward the cluster,” NASA says.

There’s still much for astronomers to learn about how stars form, but Webb’s advanced infrared cameras are sending back new kinds of images that reveal events behind the thick clouds of stellar nurseries.

“Webb has already begun revealing a universe never seen before, and is only getting started on rewriting the stellar creation story,” NASA said.